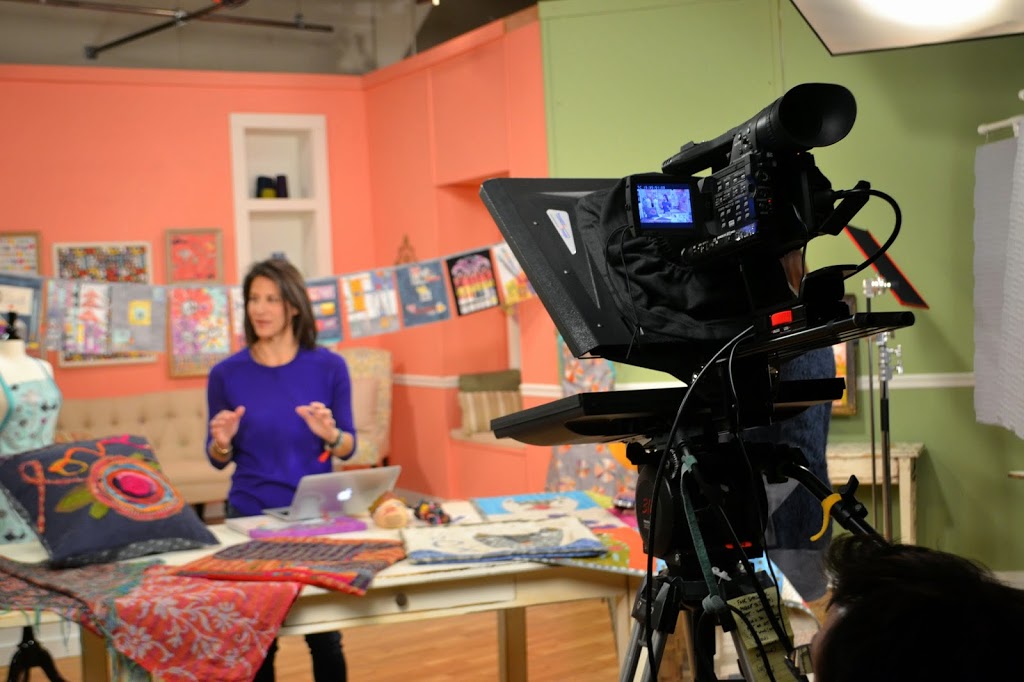 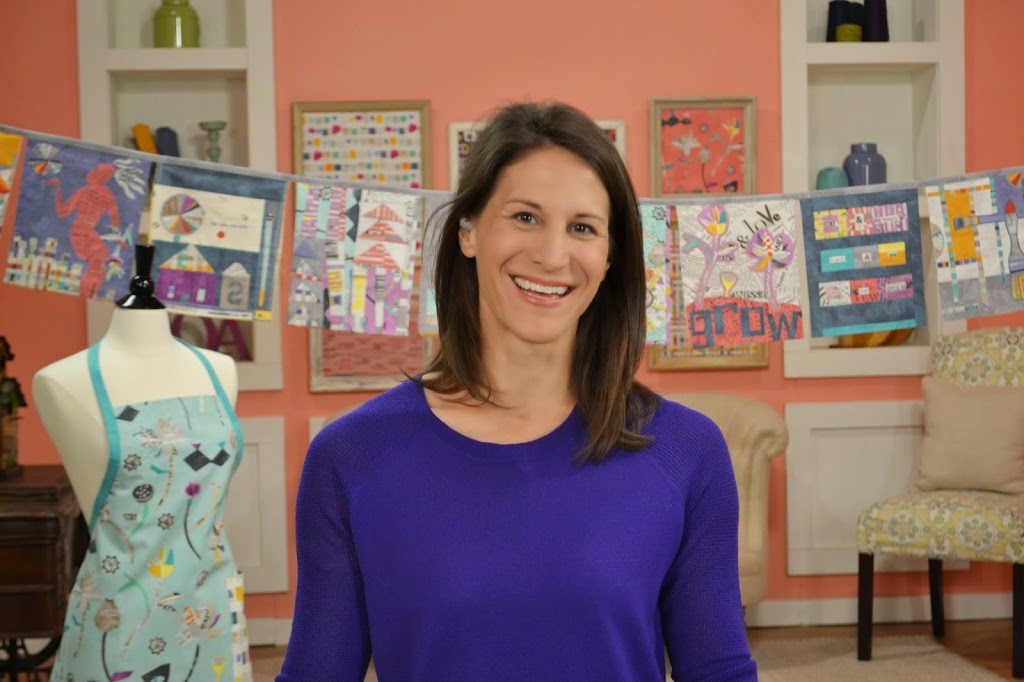 So, I got a call about two months ago. It was Vivika De Negre from Interweave. I have always liked her when we’ve met at Market. She is lovely, warm and genuine. She said they’d like to produce a DVD of me doing some of my fabric collage and teaching design basics. She said they’d also film three segments for Quilting Arts TV on PBS on the same day. She said it would be filmed the week of March 24th…in a production studio…in Ohio. Solon, Ohio…just outside of Cleveland.

Well, what would you say if you got that call? You’d say yes. I know you would. And so did I.  How nice of her to ask me, I thought. Contracts ensued. Papers to be signed. Outlines to be written. I walked through the hoops. Sort of. I mean, I dragged my feet as slowly as I possibly could. I waited as long as possible on each and every step. I read the contracts with mild interest. Because in the back of my mind…I wasn’t going anyway. I knew it was all an exercise in futility. It was all folly–the game I had played with myself many times in the previous decade and a half–the fear of flying shell game. The I’m-hiding-under-my-bed game. The too-scared-to-go-so-I-will-start-justifying-why-this-is-a-bad-idea-anyway game. Oh, my DVD probably won’t sell anyway. Who wants to watch me make stuff on tv? Who would pay money to buy a DVD of me speaking? Wah, wah, wah, wah…insert Charlie Brown voice here. That is the sound of me making myself small. That is the sound of my fear and my shame about my fear. My fear of flying is, in part, a fear of flying…of the highest version of myself…of soaring. And my fear of flying is also a deeply encoded habit–the fear habit.

So it looked like this: I avoided every step of the process for as long as humanly possible. Until I finally had to explain it to Vivika…that this fear had been my long time companion. I told her (and more importantly I told myself) that I’d be there. I knew I would go.

This fear is so big that everyone who knows me or has known me at any point in my life is probably aware of it. I have flown. All my life I have flown…many places in the world. Europe. Asia. But never with much grace. Never easily. And as a child, I had to take Dramamine. Because I’d puke. I’d puke on the plane. Who pukes on a plane? I did.

It was pure, raw fear.

So here is the part where I will tell you why. Two letters: K.K.

My grandmother, K.K. Kay Greenberg. My mom’s mom. God, she was amazing. She was gorgeous and so alive…so creative. She had psoriasis. I used to name the freckles on her legs. She had so many. She was sort of a red head, but I don’t think it was real. She was bigger than life–an artist, painter, actress, model. She was incredibly fun. Actually, she was fabulous. I adored her.

When I was three, my Dad and I went to the airport to pick her up. She had recently divorced my grandfather. Fun-loving…frolicking…can’t hold her down. So she was on her way to visit us in Alabama in a two-seater plane with her pilot boyfriend. They were coming from Kansas City, but they swooped down to Miami to play.

We waited at the Birmingham Airport for a really long time, Dad and I. Then we went home. There was more waiting. And then there was a call. My mom, at age 24, lost her mom that day. Their plane… they were skimming the beaches…they couldn’t get up high enough to clear the tall pine trees.

And so, now you can see the root of my fear–my longtime traveling companion. That is how trauma plays out. I am 41. Vivika De Negre called from Interweave. I had to fly to Ohio. I looked at Amtrak. I did. You know I did. But it required 48 hours and two buses and two train changes. Driving was out. I had to fly. Period. I had to face it alone. People offered to fly with me. But I knew I needed to do it alone because I would act out and be more dramatic if I had an audience. I had to do it by myself. Because I don’t want my kids to know…I don’t want them to be afraid because I taught them to be afraid. And they are old enough to begin to see. And so I had to go. I had to go for them and I had to go for me.

As an adult, in my twenties, I began to notice that the weeks and months leading up to a flight became very anxious for me. The anxiety disseminated into all areas of my life. The trade-off for flying started to seem not worth it. So I stopped. Even after doing so much work in my thirties to rid myself of the illusion of control, this is where I still held on. I let myself white-knuckle this…almost out of habit.

So, for the first time in my 38 year journey with this fear, I faced it straight on. I went towards it. I worked on it on my yoga mat–yielding surprise sobs in savasana as I realized that I just wanted to wave goodbye to her…the three year old me in the Birmingham airport…looking out of the big plate glass windows…waving. I just wanted her to wave back once more. I had to let her go.

I went towards my fear–I asked my friends for help. Each of them gave me a trinket, a tool, a technique to help me. Talismans, one and all. But you know what? I love talismans and trinkets. I love magical thinking and real or imaginary forcefields. I believe in the power of my mind and heart. I believe in my breath. I believe in music. So, I gathered up my fistful of malas and bracelets and breath–of tears and courage–pressure points and playlists and I got myself through baggage check-in and security and I even bought myself a sandwich. And I sat in my seat and breathed. I could feel the love of friends and family around me. They texted and called. Their love helped me. That is what god is, isn’t it? I cried at take off. But that was just a few minutes and then I got to see huge farms and mountains and for the first time I saw the Great Lakes and they are big. So big–like little seas.

And, oh yes, I filmed a DVD and three tv segments. And is was so fun! They did my hair and makeup. There were producers and camera men and assistants and editors and sound guys and one guy had a job of just putting in and taking out my microphone and earpiece all day. I felt like secret service. But my ear thing kept popping out. It was an exhilarating and exhausting 48 hours. Everyone was lovely and kind and I got to speak about what I know well–so that was exhilarating and easy and a complete and total honor. In my DVD I speak about drawing, design and composition basics and how to use them in your fabric collage creations. And I didn’t suck! I know I didn’t. I think it will be OK. I think you will actually like it. Oh, and I learned that I seriously talk with my hands. I haven’t seen the footage so fingers-crossed it will be OK. My main point was to help people to celebrate their inner artist. I am a creativity enabler, after all. No matter what I am teaching, my message is always the same: trust yourself, know you can, you are good enough, there is no perfect. And, guess what? I listened to my own wisdom and pulled up my big girl pants and I got on a plane and I did it.

The three segments will air on PBS this summer and my DVD will be available this summer here. I’ll keep you posted!

Carrie, I’m so proud of you. You facing your fear means that SO many people will get to be touched by your creative spirit, and ignite their own! Thank you for taking the deep breaths and asking for help to get through it all. Thank you for sharing You with the rest of us.

If you haven’t yet, you should talk to your kids about how you were afraid, and why, and how you faced that fear, just like you did for us. I don’t think you are crazy for thinking watching quilting shows with a babe is soothing. I even did that to distract myself from labor pains. It maybe worked a little too well, as I probably should have headed to the hospital a little sooner–like soon enough to have an epidural, but I digress…

Congratulations on facing your fears. It is hard but so worth it.

Thank you for sharing your story. It’s very inspirational!

So very inspiring. Thanks. See you on TV!

How exciting! I just wrote about my own grandmother today, and how completely she shaped me in ways I never recognized. How funny that we hold them so close (and so tightly) without even realizing it. I suspect she would be more than delighted to have seen you fly–literally and metaphorically.

Loved reading this–thanks so much for sharing it with us!

As a fellow fearful flyer I loved reading your post and would be happy to commiserate anytime. I have traveled around the world, but it never feels easy. The one thing I have learned to accept over the years is that there is no magic moment when the fear will disappear, and choosing to take on a big experience like you did is commendable. Looking forward to seeing your segments! Michelle in Portland, OR

Wow. What a great post. I’d have dragged feet too. Not over a fear of flying, but a fear of being the center of attention. All those cameras and people looking at me. I couldn’t handle it. Which just all sounds ridiculous. I practice my power pose in the bathroom before I have to do things like that. It helps. 🙂

Thanks so much for sharing your comments. I admire tremendously your awareness and courage.

What a beautiful post! It is no wonder that fear was generated by this childhood tragedy. I’m proud of you for working thru it, and it says a lot for you that you solicited the help of your friends.

Thank you so much for sharing about your Mother and your Grandmother and yourself. You are lovely and brave and talented and so kind to share your sweet story. Thank you. I look forward to the DVD.