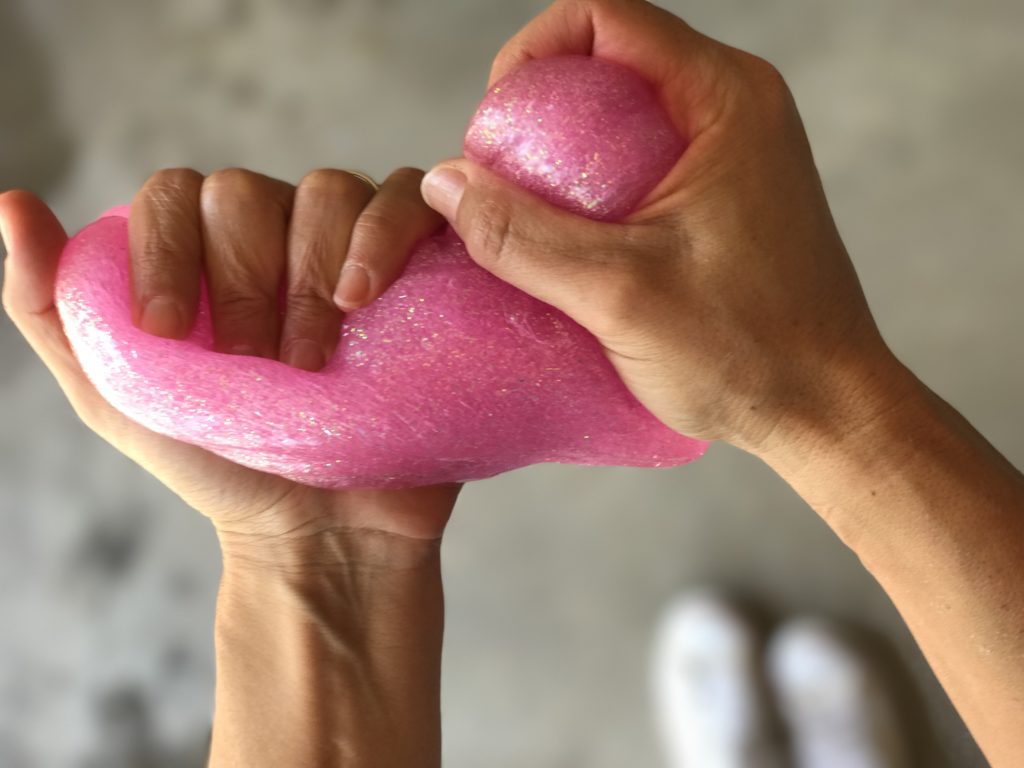 I’m writing in my head all the time. Well, actually not in my head. In my body. Since I’m constantly urging people to turn off their minds in their creative practice when I teach art, painting, creativity, vision board workshops, I can’t say I’m writing in my head. More of the torso, actually. I feel the words in my shoulders and chest, roughly. Not the wrists. Not the root chakra. Not my heart, really. But in my chest. They collect like Luna’s fur does on our concrete floor. At first it doesn’t seem like much–she’s a German Shorthaired Pointer, after all, so it doesn’t seem like there’d be a lot of fur. But after a few days it’s like a game of miniature pick-up sticks–white dashes covering the tobacco colored concrete. When I sweep it up–there’s enough fur that it looks like a medium-sized gerbil. And that’s just after two or three days.

My words are like that. I forget they’re falling into my chest. They don’t fall individually but in complete sentences. And after a while, there’s enough in there that I need to sweep. That’s what I’m doing now.

The sentence I just found that needed to come out was that there’s been a run on Elmer’s glue in America. Groceries and pharmacies are sold out today. I just went to two places. If you have a middle-schooler then you now why: slime. We’re all making slime. The YouTubers are making slime. In camp they’re making slime–clear slime, fluffy slime, glitter slime, so-called ‘crunchy” slime with beads in it, unicorn-poop/rainbow glitter slime, and of course, the other slime called Gak–you know about Gak if you have a pre-schooler. Preschool is filled with Gak and Ooblek and Floam. Floam has little tiny foam pellets in it. Middle schoolers, however, are not playing with Floam. I think they draw the line there. But I’ll tell you what, they are really interested in kinetic sand, still.

And the reason this is significant is not because of YouTube. But because of their other sensory infatuation: fidget spinners. If you don’t know what one is, just stop reading and go Google it. So-called “fidgets” have taken over the bodies of elementary and middle schoolers in the past few months–and just in time, too. Teachers across the land were no-doubt desperate for anything to break the previous cycle: bottle-flipping. Oh, they couldn’t wait for students to stop. I mean, the noise alone is crazy-making. But then all the itinerant clapping and whooping and cheering when they actually achieve the impossible flips and landing even on the cap-side sometimes.

Anyway, the thing that got me thinking was the sensory state of our youngest generation. It seemingly really needs to be soothed. Slime and Gak and Fidget Spinners are all tools used to help kids with attention disorders, autism, and anxiety, although I have read studies stating that experts aren’t sure about that.

But regardless, all these kids are really into being soothed. I guess I wonder why. Are they feeling the same world we’re feeling? Children are innately intuitive, tuned-in, and sensing beings. Is it the news? Is it the schoolwork and pressure? Is it the social climate? Or, and probably more likely, are they just pursuing their pleasure? Children are much, much better at following the cookie crumbs of pleasure and passion and play than grown-ups are. We need reminders like; “If it feels good, keep doing it.” Kids don’t. They just keep doing it. Slime and fidgets feel good, they are definitely soothing on a sensory level.

I need soothing too. I signed off of all social media for my fourth annual Social Media Fastjust a couple of weeks ago–and for me–that’s like sinking into a bathtub full of slime. It’s so soul satisfying. Soul Slime™! It is my peacetime resistance. I have to use social media for my brand so I can’t just dip a toe in it–I have to go in all the way. I manage it myself. All the time. And my social media siesta is a giant whirling cosmic fidget spinner, and I’m seated in the middle of it like a Buddha–feeling the vibrations and whirling from the eye of the storm.

I’m on holiday. Actually, I’m designing my next fabric collection and I can’t hear my own inspiration over the sound of the internet. So, I’m off. And it is awesome. It’s so good that I can’t even tell you.

I’m just making slime with my kids and actually, one day this summer we went to FOUR stores looking for fidget spinners and ended up buying the Ferrari of all fidget spinners on Amazon. It is Rainbow Metallic Gold-like a true unicorn might be.

I just wanted to ask you: what feels good to you? Slime? Back rubs? Being at the beach? Soaking in the tub? Listening to crickets as the sun goes down? Writing? Cooking? What soothes you to your very soul? Whatever it is, chase it. Go and get it because this is the chance. Right now. Kids so get that. They’re not sorry.

I’m here in my cool house on this 113 degree day in my cute Old Navy striped shorts and I felt like letting the words fall out of my chest for the past hour. So I did. And I ate some 92% dark (fair-trade, heirloom) chocolate. And now it’s time to pick up my kids at camp and I feel so much better than I would have if I had just mindlessly done the chores around my house for the past hour. My house is dirty. In fact, there’s a lot of dog hair on the ground, but my soul is happy.

So, if you haven’t #unplugged yet this summer, give it a try. And I wish you hours of sensory pleasure and slime-making and being in the moment with the people you love.

Carrie, I thoroughly enjoy your blog posts and your fabric! I work part time at a quilt shop so when the owners get in your line I squeal (internally) like a school girl.
I adore how you describe the visceral repository of writing in your chest. 🙂 I feel my creativity in my upper abdomen. I wonder where other people feel such things.
Thanks for enlightening me as to why Michaels is stocking gallon jugs of Elmer’s glue. 🙂 Happy slime making and life savoring.

They disallowed one of the fidget toys at my son’s elementary school, it was interfering with lessons and causing safety hazards. Makes sense to me.

My son is autistic, but without expressive language delays. (He has plenty of impairments with pragmatic language skills, non-verbal language skills.) He does not sit still! In fact, I recently discovered, in a roundabout way, that he’s able to express his emotions better if he’s moving, so when he’s overloaded, we walk up and down our building’ five flights of stairs or he bounces on the trampoline. Works wonders. But it has to be managed. I’ve tried the fidget things, but he does better with a reading book. From what I understand, sensory processing issues are best address from a proactive prospective, not simply giving someone a fidget toy. And you are right to say that the evidence is far from conclusive. I enjoy your work, btw. Big fan of your fabric prints!